Intellectual Capital has the same connotation as Economic Moat


Economic Moat is a term that is very familiar to value investors worldwide. The legendary investor Warren Buffet is credited with having coined this term. Investopedia defines it to be the competitive advantage that one company has over other companies in the same industry. The wider the moat, the better it is for the company as it helps the company to keep the competition at bay. 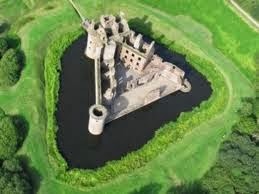 Stockopedia identifies 5 advantages that companies with wide moat hold over the competition:
a.    Brands – business identities that have a positive recall in the minds of consumers
b.    Patents – exclusive rights over a product/service granted by the government to the inventor for a limited period.
c.    Regulatory approvals – licenses granted to business by the government creating barriers to entry for others
a.    Cheaper Processes – Businesses that are able to do the same job using cheaper processes develop a cost advantage and hence a moat
b.    Location – Businesses that have a location advantage develop either a cost or a revenue advantage or both, and thereby develop a moat.
a.    Distribution Networks – A business that can influence the distribution channel to give preference for selling its products has a natural moat over its competition.
b.    Manufacturing Scale – A business can develop a moat by using economies of production scale to derive cost advantages
c.    Niche Markets – A business can also develop a moat by targeting its products and services towards niche markets.

The concept of economic moat as described above is straightforward really. Businesses that have a wide economic moat can dictate the price they can charge their customers and thus generate greater profits. It is as simple as that. The difficulty arises when we try to identify companies having wide economic moats in practice. There is no known formula for a quantitative calculation of economic moat. Hence the determination of wide moat companies remains the exclusive domain of astute investors who have a lifetime of expertise in this area. And sometimes even they get it wrong. Is there any hope therefore for the rest of us?

Let us look at the advantages enjoyed by wide moat companies once again. It is obvious that every single advantage enjoyed by companies holding a wide moat as outlined above are intangible in nature. We should therefore be able to categorize these advantages into one of the three forms of Intellectual Capital – Human, Structural and Relational. Let us run through the list and attempt that -

If we dig deeper, we are sure to find elements of Human Capital behind each of these capitals, since it is people ultimately that make Structural and Relational Capital work, but that is beside the point. The larger point that I want to make is that Economic moat as defined and understood by investors is nothing but a manifestation of the Intellectual Capital of the business. To confirm this correlation between Economic moat and Intellectual Capital, let us read the investors understanding of Intellectual Capital. Turning to Investopedia once again, we find that it defined there as follows:
The value of a company's employee knowledge, business training and any proprietary information that may provide the company with a competitive advantage. Intellectual capital is considered an asset, and can broadly be defined as the collection of all informational resources a company has at its disposal that can be used to drive profits, gain new customers, create new products, or otherwise improve the business.

The key point of this definition is that Intellectual Capital is an intangible asset that provides competitive advantage to the business that in turn can generate greater profits. Strikingly similar to the definition of economic moat, you will agree. The definition of these two terms establishes the qualitative correlation between them and it establishes my proposition that economic moat is a manifestation of the Intellectual Capital of the business. However to be sure, I wanted to establish a quantitative correlation as well. For this purpose, I turned to the icTracker, a web based tool that calculates and reports the Intellectual Capital of leading Indian and US businesses every quarter.

According to the theory behind economic moat, companies with wide moat have a competitive advantage which results in greater profits. This is the equivalent of saying that companies with high amount of Intellectual Capital – higher at least than the assets listed on its books - will generate a positive EVA. In order to compare the Intellectual Capital of business of different sizes, we do not use the absolute value of Intellectual Capital (calculated by icTracker) itself. Rather we use the ratio KB which as has been said earlier is the proportion of intangible assets of the business to all of its assets. KB simply makes the Intellectual Capital of all businesses comparable. With these definitions in place we can now compare all companies in the icTracker database along two dimensions. Along the rows, we will count the number of companies that have a positive EVA or a negative EVA. Along the columns, we will count the number of companies that have a KB greater than 0.5 (indicating more intangible assets than traditional assets) or less than 0.5. The following table shows the number of Indian companies split along these two dimensions for the quarter ended March 2013.
There were 324 Indian companies in the icTracker database at the end of March 2013. Note that 126 of the 324 companies that have a KB greater than 0.5 are generating a positive EVA. Correspondingly, 131 of the 324 companies that have a KB less than 0.5 are generating a negative EVA. Therefore added together 79% of the Indian companies seem to be following the economic moat theory for the March 2013 quarter.

We also have two exceptions though –
Nonetheless, companies in these two categories are exceptions to the economic moat theory.

Next I extracted the same data for the quarter ended March 2013 for US companies, which I have summarized in the table below
There were 151 companies in the icTracker database as of March 2013. From this data we can see once again that 78% of the total 151 companies in the database follow the economic moat theory, whereas the remaining 22% fell in the category of exceptions.

The icTracker database calculates the Intellectual Capital of all leading companies in India and in the USA every quarter from March 2005 onwards. It therefore has data for every quarter for every company that it tracks for the past eight years. That is 32 quarters of rich data! Therefore I went one step further in my analysis and pulled out similar data for each quarter since March 2005, organized it along the two dimensions as above separately for Indian and US companies and then summed up the totals. My idea was to establish that my proposition holds true not only for a single quarter but also over the long term. The results are shown below for both India and the USA.